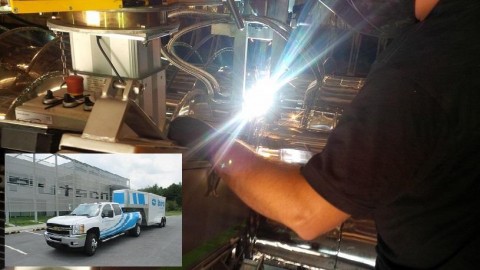 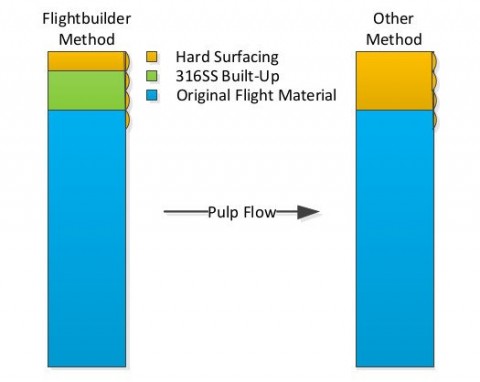 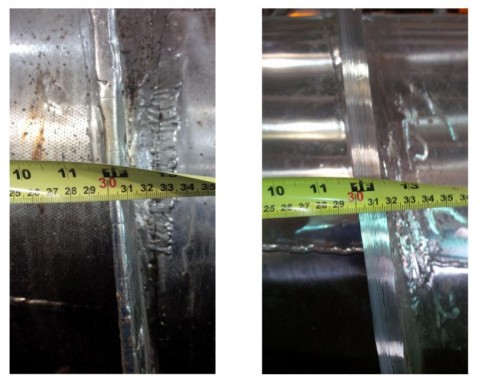 The amount of moisture removed in a pulp press is dependent mostly on rotational speed and clearance between flighting and screens. Cossette sizes of beets (slabs) also influence pressed pulp moisture. In addition, freshly harvested and stored beets have an impact. Throughout campaign, the flight surfaces wear due to abrasion, which is caused by high mud content of harvested and sliced beets. The high mud content in cossettes is an indicator of high raw juice solids. The mud content of beets can vary from location to location. Wear causes the tip of the flighting to become rounded and only encourages slippage between the flighting and screen. Proper clearance between the rotating flight and stationary screens, and maintaining a clean, square edge on the flighting tip in pulp presses are the most important factors. To allow consistent control and maintain efficiency of the press, this clearance must be restored.

Rough calculations indicate that return on investment could be realized approximately in half a campaign based on energy cost savings for drying pulp. The frequency for flight rebuilding using the Putsch® flight rebuilding system is estimated at approximately every three campaigns, depending on campaign length and abrasive content in the pressed pulp material.

The Flightbuilder process uses a Putsch® provided 316 stainless steel wire to build up the flighting until very near the proper clearance. This matches the base material the flights are made from. Hard surfacing material is then used to prevent wear on the tips and outer faces of the flights (Fig. 2). Other processes that have been employed in the past use hard surfacing exclusively. If multiple passes are required to build the flighting up to specification, as is often the case, new hard surface material is welded to existing hard surface material. This causes the material to become excessively brittle and prone to fracturing. Sections of this material can and have broken off and destroyed screens and downstream equipment such as pellet mills. Replacing screens and pellet mill dies and rollers is very costly both in terms of cost of parts and labor and lost opportunity due to downtime. This is avoided by using the base material for multiple passes and using only one layer of hard surfacing.

One often overlooked expense associated with hiring any contractor is supervision. The flightbuilder crew was self-sufficient and required very little supervision. The flightbuilder crew observed all safety policies required by American Crystal Sugar Co. and completed all forms and paperwork pertaining to their work (i.e. Hot Work Permits). The crew and equipment travel in a truck and trailer, which takes up very little real estate on factory grounds.

A Flightbuilder crew rebuilt flighting on one Stord 2500 and one Stord 980 pulp press in the Crookston facility. A third press (Stord 2500) received a brand new set of spindles. After campaign began, the pulp presses were observed to determine the effectiveness of the flight rebuild project. Samples were taken from each pulp press, as well as the wet feed pulp. A moisture analyzer was used to determine the moisture content in the pulp. Results were recorded along with the time sample was taken and the indicated speed at which the press was running. Using this data, moisture removed by each press was calculated and compared.

In conclusion, the Putsch® flightbuilder process is an economical way to restore and improve performance of a pulp press. It is also superior to other flight rebuilding processes due to the use of base metal to build up flighting before adding hard surface material. To date, there have been no instances of flighting material breaking off and damaging equipment in the Crookston facility. Utilizing the flightbuilder crew was a worry-free and painless experience. They required very little supervision and adhered to all safety policies and paperwork requirements.