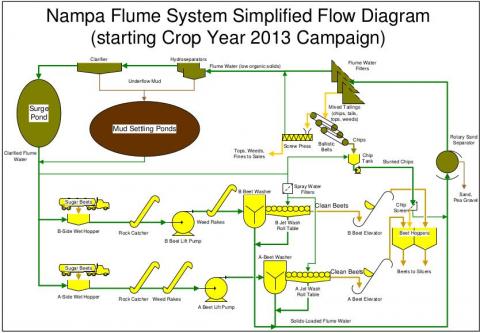 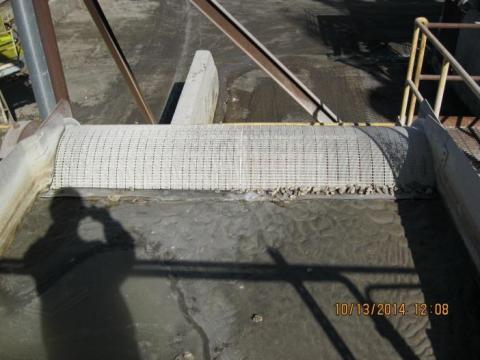 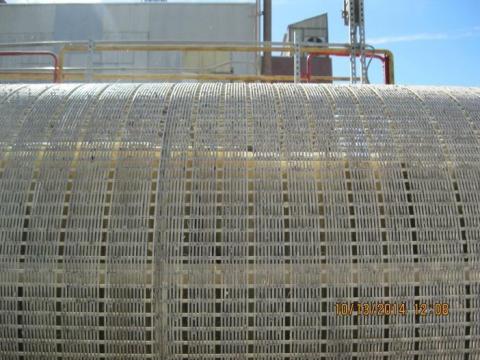 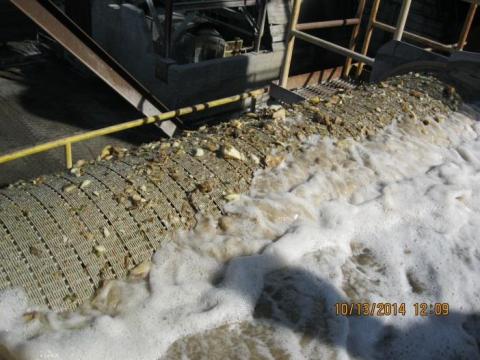 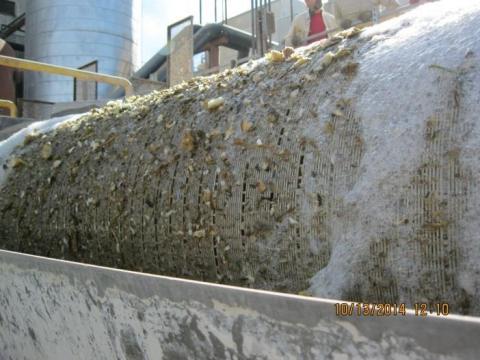 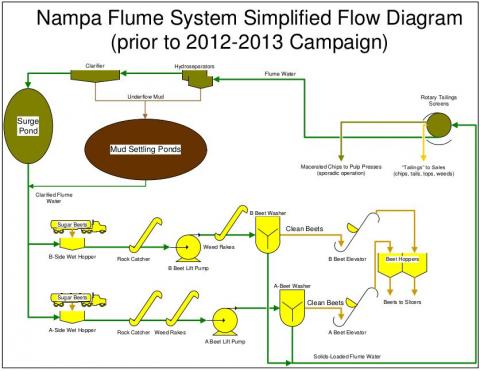 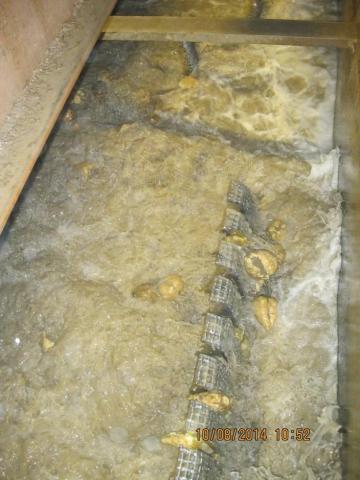 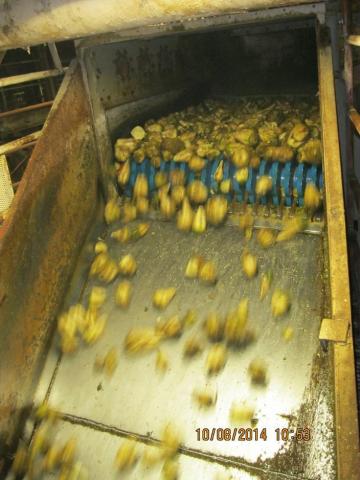 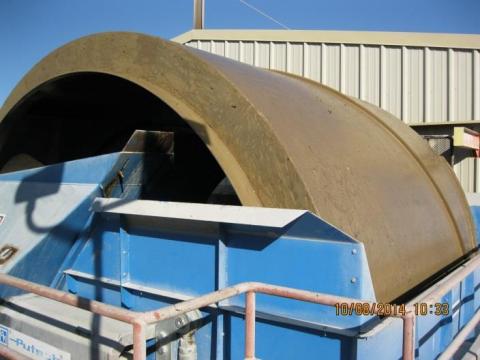 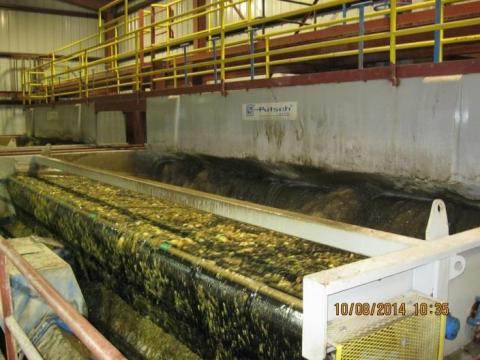 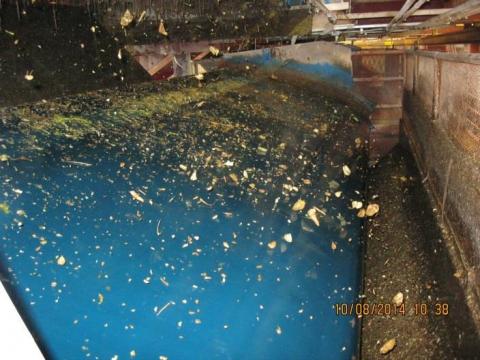 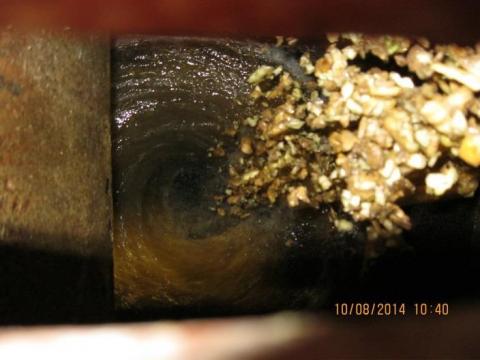 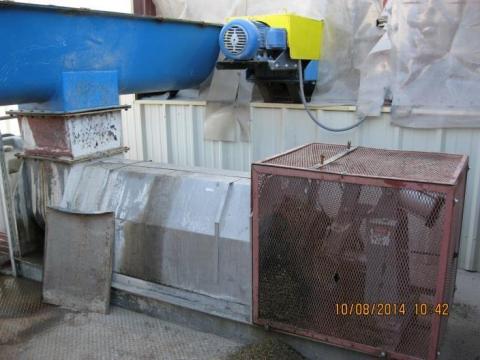 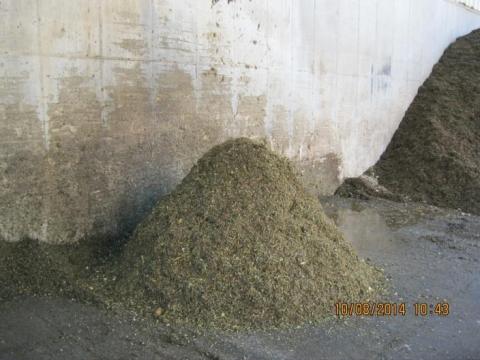 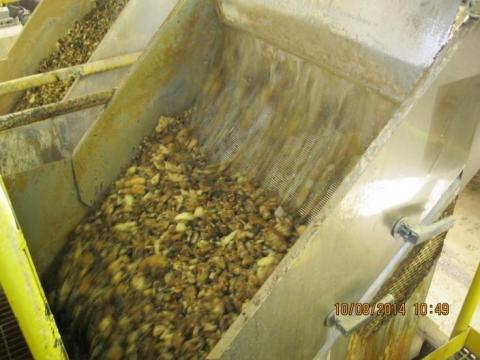 Most sugar beet processing facilities employ some type of water-based fluming system to transport whole sugar beets. This water may also be utilized in part of the beet cleaning process as well. Inevitably, the flume water becomes contaminated with a large quantity of organic matter. This material typically includes tops, skins, tails and chips of beets along with some weeds.

Modern environmental regulations dictate that these organic solids must not be discharged into public waterways. Thus, as part of the flume water treatment process, they must be separated from the water. This can be achieved by any combination of a wide variety of methods, most involving some sort of screening or filtration system.

Once separated, the resulting moist biomass can be difficult to dispose of. It typically contains a significant amount of sucrose and plant fiber, but may also contain some dirt. Its storage life is short before mold and/or bacterial action begin to break it down. In many cases, it is sold at low value or even given away for use as cattle or swine feed.

This was the case at The Amalgamated Sugar Company LLC’s Nampa Factory during the years prior to the 2012-2013 Campaign. Beet chips, tails, tops, weeds, and any other debris suspended in the flume water were removed by a bank of small rotary screens which deposited them in a mixed pile called “tailings.” This organic matter was sold as cattle feed for just a few dollars per ton due to its inconsistent quality.

At times, a loose doctor blade was utilized to deflect the largest chips to a grinder which macerated them prior to being sluiced to the pulp presses. This added some value, but the transport water was a large source of bacteria to the presses, so the system was frequently shut down when diffuser infections were suspected.

Additionally, the old rotary screens were not very efficient, causing the flume water to carry a large quantity of organic solids to the settling ponds. This material caused significant odor problems during pond cleaning in the summer months.

A solution was sought which would reduce the organic loading to the ponds, improve tailings quality (and therefore its marketability) and recover larger beet pieces to the factory process.

A process flow diagram of the Nampa flume system prior to the 2012-2013 Campaign is shown in Figure 1.

A set of seven stainless steel rotary screens were employed to remove any suspended solids remaining in the flume water after separating the whole beets at the Beet Washers. These screens were very high maintenance, requiring mud to be shoveled from their feed trays several times daily. They also suffered from calcium scale build-up on their stainless screen wire. This issue was so severe, that it led the operations crews to remove a portion of the wires to allow more flow area for the water to pass. This, of course, reduced the filtration efficiency, adding to the amount of solids that slipped by the edges of the screens and went on to the clarifiers and mud settling ponds. Several photos of these screens can be seen in Figures 2 through 5.

During the inter-campaign season of 2012, an entirely new beet cleaning, tailings separation and chip recovery system was installed at the Nampa Factory. This consisted of a pair of Putsch® jet wash roll tables, a Putsch® rotary sand and grit catcher, three Putsch® flume water filters with ballistic belt separators, a small tailings dewatering press and a sluice tank, pump and screens for chip recovery to the beet hopper. The following year, paddle-style beet washers were re-installed just upstream of the jet wash roll tables. A flow diagram of the new system can be seen in Figure 6.

The new system incorporates standard paddle-style beet washers to soak and loosen dirt on beet surfaces, then utilizes filtered, high-pressure flume water to spray-clean the beets on Putsch® jet-wash roll tables. Together, these two pieces of equipment de-water the beets which are subsequently elevated to the hoppers to await slicing.

The water leaving this station is loaded with dirt, beet chips, beet fiber, tops, weeds, etc. It is pumped to a Putsch® rotary sand separator, which removes a large portion of the sand and pea gravel which is significantly more dense than the water. From there, it flows to a set of three Putsch® flume water filters. These filters apply the water via a weir system to a perforated rubber belt that travels in the same direction as the water flowing onto it. The water flows through slots which are 1.7 mm wide by 10 mm long, while the solids are retained until they fall off of the belt at the head-roll. A shaker bar “bumps” the belt to help sticky materials release. The water, relieved of nearly all of its suspended organic solids, proceeds to one of several gravity de-silting steps before being recycled back to the beet flumes.

Positioned vertically below the flume water filters are a set of Putsch® Separating Belts. The organic solids released from the filters fall directly onto these belts, which are set on an incline with the belt movement in the uphill direction. One of the belt’s idlers is hexagonal in shape, so that as the belt passes over it, it vibrates. The combination of uphill travel and vibration causes the smaller, “stringier,” stickier particles (tailings) to travel uphill, while larger, more solid particles (primarily beet chips) bounce downhill. The beet chips fall off of the low end of the belt into another conveyor (reversible) that sends them either to a slurry tank (typical) or to the same staging area as the tailings (upset conditions).

The material that travels uphill with the belt is removed with a wiper just past the head roll and falls into a conveyor that moves it to the dewatering press. Post dewatering, this material is ready for sales.

The beet chips are slurried with flume water and pumped to stationary, sloped wedge- wire screens positioned vertically above the beet hopper. As the water passes through the screens, the chips are dewatered and fall into the beet hopper to be sliced along with the factory’s regular supply of whole beets.

Although the entire process is very flexible, it is not difficult to operate. The jet-wash roll table speeds are adjustable via variable frequency drives connected to each roll motor. This allows factory personnel to optimize the beets’ speed of travel through the washing, dewatering and discharge sections of the tables. These settings are typically only modified a few times each campaign. Each spray bar is fitted with a knife gate valve, allowing individual adjustment of spray water pressure to various sections of the table. This can be utilized to respond to changing beet conditions (fresh, frozen, muddy, etc.) in order to clean the beets without stripping their skins.

The rotary sand separator drive speed is adjustable as well. This is done to maximize sand and gravel removal while preventing beet chip discharge, and, once set, needs only rare alteration.

Of all of the system’s components the separating belts offer the most flexibility. They can be moved fore and aft, which varies the impact point of the solids falling from the flume water filters closer-to or farther away from the low end (where material is conveyed back to the beet hopper). In addition, their angle of attack can be raised or lowered, and speed of travel can be modified via variable frequency drives.

These three variables serve to allow fine tuning of the split between tailings and chips in terms of particle sizing and quantity. This is critical to in order to maximize chip return without introducing fines and/or non-beet materials to the beet hopper. Again, normal operation only requires these adjustments to be performed once every few weeks throughout campaign. In order to deal with upset conditions in the slicing station or diffuser, the chip conveyor is reversible. In this way, the operator can send the beet chips out with tailings in the case that their return to the slicers and diffusers may be a detriment to factory performance. This situation has only been experienced approximately 10% of the time since the system’s installation.

This project has met or exceeded all of its goals. During the campaign of crop year 2012 (the first year the system was on-line), the flume water chemical oxygen demand (COD) trended at approximately half the rate of the previous campaign (see Figure 16). This was due to the reduced organic solids load in the desilting system. Only at the very end of the campaign when beet quality deteriorated did the COD approach that of the previous year.

The consistency of tailings quality has improved remarkably with the new system. The particle size distribution, moisture content, and stackability of the product has become much more uniform. Gone are the days of overflowing rotary screens pouring muddy flume water and foam into the tailings pile. This has led to a significant reduction in complaints from tailings customers.

Perhaps most importantly, the goal of recovering a large quantity of beet chips back into the process was achieved with great success. By direct measurement, it was determined that 144 tons/day of beet chips are now being returned to the beet hopper for slicing and diffusion. With a factory slice rate of approximately 12,000 tons/day, this equates to 1.2% of the beets fed to the process.

Prior to commissioning of the project, there was great concern that the beet chips would create cossettes too small for the diffusion process, and that diffuser pluggage would result. However, this concern has proven to be without merit. In a continuous blend with whole beets, the chips do not cause any measurable difference in tower operation under most normal circumstances.

Economically speaking, the project has yielded great benefit to The Amalgamated Sugar Co LLC. During a typical campaign of 130 days, the chip recovery function alone has upgraded the value of 18,700 tons of beets from the previous tailings price (approx. $5 /ton) to a nominal processed beet value of $45 /ton. This is a net earnings increase of nearly $750,000 /year, or the equivalent of supplying the factory with an additional 500 acres worth of beets at zero cost. Other financial benefits have been realized in reduced labor, maintenance and water treatment costs.

The new tailings separation and chip recovery system at the Nampa factory has reduced the concentration of organic solids in flume water, improved the marketability of the tailings sold as animal feed, and enabled the return of 1.2% of the factory’s beet supply to the slicing and diffusion process. The process is simple to operate, reliable, and does not cause any significant difficulties in diffuser operation. In short, it was a “home-run.”