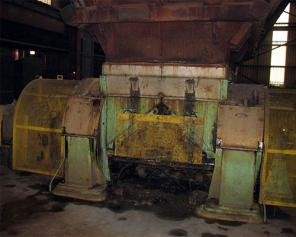 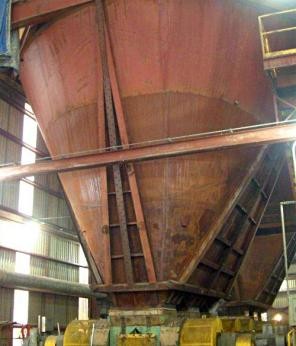 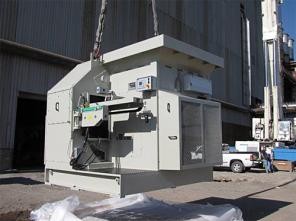 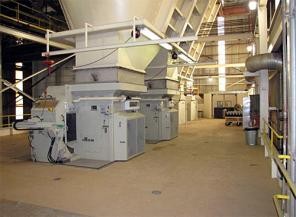 The benefit of cossette quality has long been established as a precursor of good factory operations.  However, the justification of such a statement based upon vendor data was difficult to prove with out major capital investment.  Consequently, the impact of cossette quality was felt to be real but never really quantified.  The 2010-2011 campaign at the Mini-Cassia Factory of the Amalgamated Sugar Company started with a new slicer and beet hopper installation.  From the first day of slice the factory behavior was improved over the previous campaign.

The 2010 campaign at the Mini-Cassia Factory of the Amalgamated Sugar Co. operated with a new slicing station.  This station included four new Putsch TSM 2200 slicers and filing equipment for support of these slicers.  While the main advantages for these slicers were advertized by the vendor and were centered around reduced pulp losses and better cossette quality.  These advantages were met favorably.  However, there were several benefits that were realized that were not anticipated.  These were:

The previous slicers used at the Mini-Cassia Factory were Ogden Iron Works slicers of the 10 block modification (see Figue 1). There were six slicers per diffuser and the slice rate was approximately 350 ton/hr for both diffusers.  These slicers were set with knives that were sharpened semiautomatically and placed in the blocks manually.  Shims were used at times to change up settings and back settings were set using bars of various dimensions for various settings.  When the diffuser encountered screen  pressure problems the knives were tapped up to make a coarser cossette.  This tapping was at best functional but an arbitrary method of cossette quality modification.  While this method of operation proved to be tolerable, and in some cases the only method of operational survival, the cossette quality suffered greatly.  How much was not qualified but admittedly recognized.  In the justification documentation for this project, the evaluations were made upon reduced pulp losses and better cossette quality.  While all performance milestones were met other areas of the factory started to exhibit different behavior than seen in the past.

The most surprising was the unknown or unaccountable losses dropped significantly.  Upon study it was discovered that there were no slabs on the cossette belt.  In the past these slabs would make it through the tower and pulp presses and end up as cattle feed.  Previously, when the pulp loss calculation was done, slabs were not part of the analysis and consequently the sugar remaining in the slabs was leaving the accounting equation and sold as cattle feed.  Now with slabs being eliminated, the sugar is accounted for and recovered and the unknown losses have been greatly reduced.

The appearance of the cossetttes on the cossette belt was amazingly uniform.  When the knife settings were changed it was visually and physically apparent that a change had been made.  There were far less fines than in the past.  A feature of the new cutters was that the beets were oriented in the long direction to produce the longest possible cossettes.  While the technical staff disbelieved such a characteristic was possible, it definitely was visible in a window above the knives that this orientation was happening.  The longer cossettes and the smaller amount of fines aided in the diffuser performance.

The tower diffusers are now responding very smoothly to rotating speed and water lever changes with the introduction of better cossettes.  The past diffuser operation was much more erratic.  Tower torque problems have become less frequent.  The overall operation of the diffusers has become more steady and operator friendly.

With the elimination of the slabs, the resulting feed to the drier drums has changed the drier performance.  When slabs were present, the ending dried pulp moistures had to be maintained at a very low level in order to prevent spontaneous combustion in the pulp warehouse.  With the slabs gone, the dried pulp moisture has been steady and the quality of the dried pulp has become more consistent.  Pulp drier out put has increased while using the same amount of fuel.

The sharpening equipment supplied in this installation is all automatic except for the transferring of the knives from one station to another.  Worn knives are automatically discarded thus keeping the length of the knife to an acceptable level.  The placing of the knives in the block is done manually, but the up and back settings are automatically set by the automatic wrench.  This creates a uniform set of knives in each block of every set.  A great improvement over the previous operation.  The knife settings are now all the same and when a change is made all knives in the set are the same.  This allows for a predictable operation based upon machine settings and not upon opinions.

While the above statements indicate the slicers are wonderful, it should be mentioned that several issues are still being worked on.

The first of these issues is the capacity of the separate pieces of filing equipment.  While no fault of the supplier, the throughput of the filing equipment can not keep up with a very frequent amount of knife changes.  While slicing frozen beets it was discovered that the regular sharpened knives would rollover and in effect loose capacity, cossette quality would drop and a knife change would be called for.  Upon installing the new knife set, it was discovered that the knives had to be changed after only 11/2 to 2 hours of run time.  With four slicers behaving the same way, the quanity of worn knives exploded.  This large quantity of knives to sharpen was too much for present sharpening equipment to handle. To help solve this so called bottle neck, different knife settings were tried along with a different size of seat plate.  Also a more blunt knife profile was tried to retain more strength in the cutting area of the knife.

Idaho frozen beets are admittedly different than those of the Red River Valley.  When piles freeze, the outsides of the pile are stripped away and brought to the factory.  Along with the frozen beets are some unfrozen beets.  So there is a blend of frozen and unfrozen beets being fed to the factory.  The objective of factory operations has been to continue to produce high quality cossettes with this blend of beets.  Therefore trials with a combination of blunter knives, higher up settings, along with a less feather edge on the knife has allowed the production of cossettes to continue even in frozen beet conditions.  However, the changing of knives is still frequent although not as often with regular knives.  A hardened knife has been tried with very favorable results.  So favorable in fact, that all knives now are of this hardened variety.  But hardened knives do increase the wear and tear on the filing equipment.  This generates the question of the capacity of the filing equipment and the need for backup filing equipment to be installed to allow for repairs during slicing operation.

The new slicers only come in one configuration.  There are no left hand or right hand machines.  One size fits all.  Consequently, the beet hoppers above the slicers and cossette belts below the slicers had to be replaced when the new slicers were installed.  The beet hoppers were designed to be mass flow, no corners.  The rounded side design has proven to feed the slicers without rat holing even under frozen conditions.  If the beets do freeze to the walls, hot water placed on the side walls inside the hopper causes the beets to release after a few minutes.  This eliminates the need for mechanical pushers to break loose the frozen block.

The slicers are very sensitive to non-beets such as rocks, metal, etc.  The slicers are equipped with a door that is electrically connected to a shut down sequence.  When a non-beet is encountered, the door raises and the slicer is stopped.  The offending item is removed and the slicer can start up when the door and guards are closed.  If there is knife damage, the block or blocks can be replaced without having to change the entire set.  The Mini-Cassia Factory experienced many such stoppages because of the non-beets and in some cases ice from frozen beets.  While ice is unavoidable, the removable of the non-beets is an issue that needs to be addressed in the beet cleaning station.  The sensitive nature of the slicers to non-beets has saved knives where as in the past the non-beets were sliced or the entire set of knives was destroyed.  This feature of the slicers has saved knives, but the frequent stoppages have been something the operators are still trying to get used to.

There are some learning curves that are still being developed.  The areas that need some attention are:

The new slicing station has been a valuable installation to the Mini-Cassia Factory.  All performance objectives have been met and several additional benefits have been realized that were not anticipated.  The payback to the growers has been faster than estimated, and the factory operations have improved over the operations of the past.  Several operating issues still remain to be resolved but these issues are minor compared to the positive impact of the slicing station on the overall factory operation.